The store will not work correctly in the case when cookies are disabled.
Menu
Konto
Indstillinger
Sprog
Dansk

From Past Millennia (Audio CD) 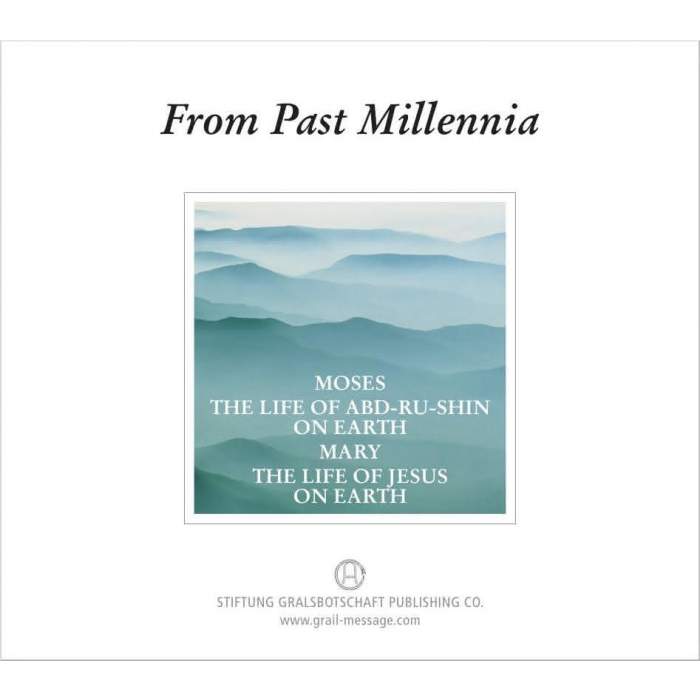 Scrolls, stones, earthenware fragments from the excavations of bygone civilisations, cities and empires do indeed tell of past eras in human history. Yet these witnesses of former epochs are silent. They convey no knowledge of Creation by which to recognise the working of the mighty Divine Powers that once formed this Creation with which to offer men the earthly home where they were to mature and work – to the glory of God.

The audiobook “From Past Millennia” mediates to the listener true life in the working of the Laws of Creation. The clear descriptions make it possible to recognise the connection between cause and effect in human life. The listener finds the anchorage of the helps from the Light in the figure of Moses, in the working of Abd-ru-shin during his first earth-life at that time, in the deciphering of the Grave-tablet of Abd-ru-shin; and later on, after hearing about Mary the mother of Jesus, in the life of Jesus the Son of God on this earth.

The portrayal of the accompanying events leads the listener to grasp the great connections and to witness the Divine guidance of the peoples, free from dogma, inadequate tradition and rambling fantasy. The intention is not to reproduce outward happenings but to make it possible to grasp their far-reaching spiritual connections; for which a simple, clear language is of special help. In the recognition of the timeless values that fill this audiobook lies also the key to solving the problems and unrecognised connections of then and now. That is the deep meaning of the descriptions in “From Past Millennia”.